Four years ago, autistic Joel Sayer barely spoke, was often violent, hated leaving the house and had never even smiled. Now 13, his life has transformed completely – thanks to the dog he calls his ‘guardian angel’.Assistance dog Caddie, a Labrador, has helped Joel achieve milestones his family never thought possible – from joining family outings to going surfing and even taking a trip to the dentist.

when speaking to the BBC Joel said: “Caddie is my special friend, my super dog. This world we live in I find hard, I find everything hard, but Caddie keeps me calm and keeps me safe.”

Joel has been given a new lease of life thanks to his amazing four-legged friend, Caddie,  is an assistance dog who was trained at the Banbury-based charity Dogs for Good. Caddie has such a positive effect on  Joel’s life that he set out to raise  £5,000 required to train an autism assistance dog for another child. Joel entered Caddie into the Crufts Friends for Life Competition earlier this year in order to raise the necessary funds. Although reaching the final Joel and caddie were pipped to the post and were awarded £1,500 as runners-up.  Undeterred Joel raised the rest of the  shortfall to enable the charity to train another puppy. 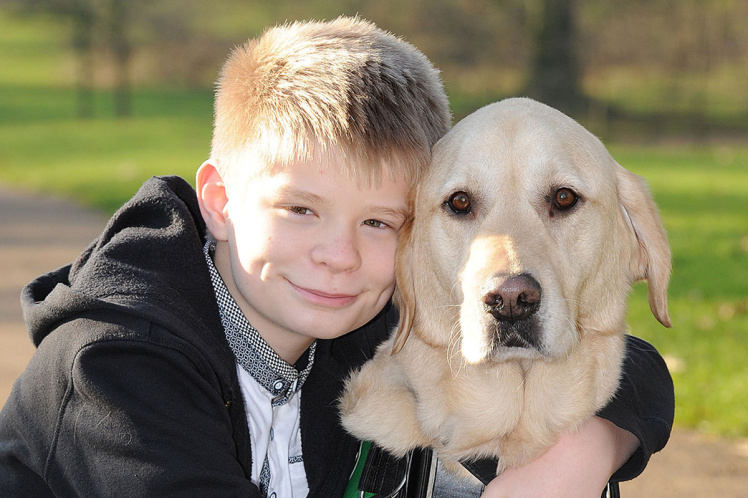 Joel’s story touched the hearts of many people after appearing on ITV’s this morning and organisations including an anonymous donor, who added an incredible  £20,000 to the fund. The Midland Counties Canine Association matched Joel’s tally, and donated £6,000 to sponsor a puppy in Joel’s honour.