Adam Boulton, Sky’s news presenter has come in for some flak on social media for  a tweet he posted in which he said that ”some of you Irish need to get over yourselves”.

The tweet was in response to an interview he held on Friday with the Irish Tanaiste (deputy Prime-minister) and Foreign Affairs Minister Simon Coveney. Many people have been critical about his line of questioning, with those saying it was unfair and unnecessary.

A deal, which was announced on Friday, guarantees that there will be no hard border between the Rep. of Ireland and Northern Ireland after the UK leaves the EU. The deal is also expected to cost close to £39 billion pounds. 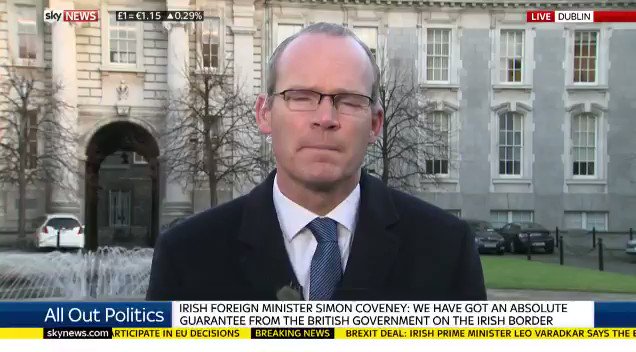 “Do you think that this week’s kerfuffle has been necessary? Do you feel slightly guilty that perhaps the Irish government over-briefed what had been achieved as a victory over the British for the European Union?,” Boulton asked Coveney.

“That [then] provoked the DUP and if you had been a bit more straightforward about a practical agreement at the beginning we wouldn’t have had these four days of turmoil.”

Coveney responded by saying: “We we never looked for or claimed any victory over anybody.

“We have been saying for many months now that we want to work with the British government to try to find a way forward that can reassure people in Ireland as well as in the UK that we can manage Brexit and we can limit damage in the way that’s now in this agreement.”

Boulton hasn’t been the only one seemingly annoyed at Ireland. Nigel  Farage, tweeted: “This is not a deal, it’s a capitulation. UK Government has put too much on the table for absolutely nothing guaranteed in return”