Tennis superstar Serena Williams and her fiancé Alexis Ohanian have introduced their daughter to the world. Alexis Olympia Ohanian Jr is named after her father. 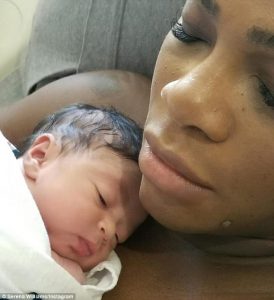 They released a YouTube video is titled ‘Hello, world. Meet our baby girl…’

It consists of various clips taken throughout Serena’s pregnancy.

The adorable video begins with the moment they found out Serena, 35, was pregnant and follows her pregnancy journey until Alexis Olympia’s birth.

In one of the Snapchat clips, Reddit founder, Alexis Ohanian, films Serena with the caption ‘your mother is the most beautiful woman on earth.’

Serena won the Australian Open when she was eight weeks pregnant. She films herself, surrounded by flashing cameras, kissing the large trophy with the text, ‘No one knows I’m 8 weeks pregnant.’ 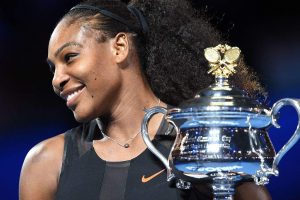 The former world number one is seen playing tennis, dancing and chilling in the pool. The video also featured photos of the star’s side profile as her pregnancy progressed and baby bump grew.

Six days after the birth, Serena films their new daughter saying: ‘We had a lot of complications but look what we got, we got a baby girl.’

Williams has said she expects to return to pro-tennis in January.