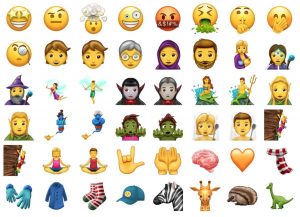 The new emojis feature a range of new additions, including broccoli, gender-neutral faces and a mermaid. Oh, and also a vampire, perfect in time for your Halloween texting.

Emojis have now become part of our everyday life and celebrities have been known to cash in on this. Celebs such as Kim K and Justin Bieber already have their own line of emojis that are available to download. In fact, Kim K’s emoji app topped almost all the app charts that are available.

In further emoji news, the messaging app WhatsApp revealed its our set of emojis this week, except they are basically the same as Aplle emjois, apart from the fried egg emoji having a double yolk and the gun emoji now being orange instead of green

In fact emojis are now so popular that in 2015 the crying laughing face (😂) was The Oxford Dictionary’s word of the year in 2015. Isn’t that a thought…