Dame Joan Collins opened up to the public about her personal experiences of sexual harassment as she exposed details of Hollywood’s shocking casting couch secrets. 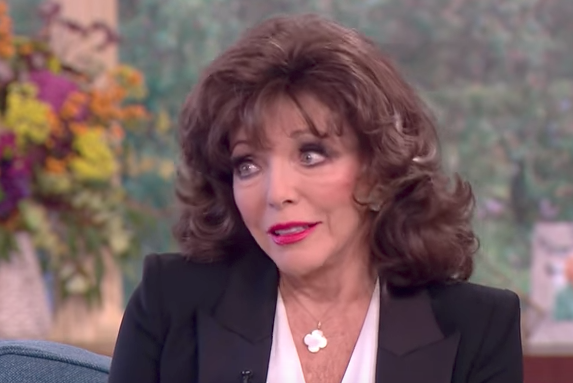 ‘I was playing in the role in the Girl In the Red Velvet Swing,’ she explained, adding that Marilyn told her that she didn’t get the role because she was considered too old. ‘She told me, she said: “Watch out for the wolves in Hollywood honey”. And I said I’ve been in British films for three years I can handle the wolves,’ Dame Joan said. She said that Marilyn elaborated further:  ‘And she said “not the power bosses honey. If they don’t get what they want they’ll drop your contract. They’ve done it for lots of girls”.’

Dame Joan also admitted she lost the major role of Cleopatra to Liz Taylor because she declined the numerous sexual offers, by producers and directors

Dame Joan said: “When I finally got my first audition for first big role at Ealing Studios. I would get on bus, train, then walk. One of the producers always used to try and catch me. And push me up against the wall, stroke my arm.

“He was tall and smelly and horrible and I would push him away. I wouldn’t think this had anything to do with the part. One day he finally caught me. The wonderful dresser hid me in the wardrobe. Shortly after that, he did get me.

She concluded the interview by saying: ‘I think a lot of people, not only in Hollywood, but in the British film industry are quaking in their boots. Not only is it endemic, it’s accepted. I have a grandchild who wants to be in showbiz and I don’t want her to have to go through what I had to go through.’

So upsetting hearing what happened to @Joancollinsdbe on #thismorning! What insanely sick people! Crazy how many times this happened to her😭

Joan Collins talking about her sexual harrasment : “They’re so famous, I can’t name them!”
THIS IS THE PROBLEM!! #ThisMorning #MeToo

#ThisMorning talking about the cover up of sexual abuse yet Joan Collins isn’t allowed to mention names! 🤔

You can watch the full interview below,