Chester Bennington’s wife has shared a heartbreaking video of the singer laughing with his family hours before his suicide. The Linkin Park front man took his life on the 20th of July after a battle with depression.

This is what depression looked like to us just 36 hrs b4 his death. He loved us SO much & we loved him. #fuckdepression #MakeChesterProud pic.twitter.com/VW44eOER4k

The clip that was taken just 36 hours before his tragic death shows the singer laughing whilst playing an eating game with his family in his home. The singer who appears to be in high spirits in the clip eats jelly beans without knowing if the flavour is good or bad.

His wife referred to the tweet as “the most personal tweet” she had ever posted and that “depression has no face or mood”. She went on to say that “this is what depression looked like to us just 36 hrs b4 his death”. 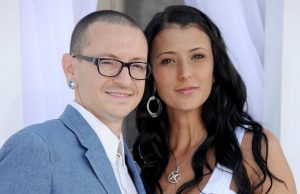 The singers widow has been tweeting #FuckDepression and #MakeChesterProud since the death of the singer. She has been urging anyone struggling with depression to reach out to someone and not suffer alone. The singers 15 year old son, Draven, has been raising awareness of depression and has recently featured in a Suicide Prevention Week video.

In the video the youngster makes a commitment to talk to others before hurting himself and he urges others to do the same.

If you are struggling then you can talk to someone: