Singer Justin Bieber recently sold repurposed Marilyn Manson T-shirts for $200. Manson claims that Bieber told him he had made him ‘relevant again’ by selling the t-shirts. 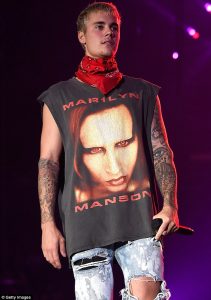 Before the feud, Bieber, 23, had worn a t-shirt featuring rock star Manson, 48, during a concert. Manson was later seen wearing a t-shirt with Bieber’s face on it.

The t-shirts were Manson’s vintage tour merchandise which Bieber ‘re-interpreted’ with his own name in 2016.

The t-shirts have ‘Bigger Than Satan… Bieber’ written on the back of them. 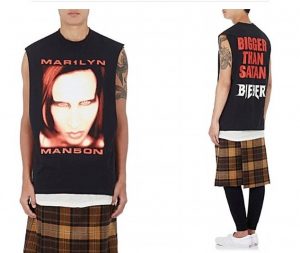 The reworked Manson t-shirts sold for £150 each.

#thankyou @marilynmanson for signing off on the “Bigger than Satan” x #jb tee… thanks for understanding our approach and re-interpretation of your vision… 🙏🏽 …never would of thought printing on my vintage t-shirt collection would take us this far! @barneysny #thewardrobecollection

In an interview with Consequence of Sound, Manson said: “he was wearing the shirt that had his name on my shirt and he said to me, ‘I made you relevant again.’”

He added: “Big mistake to say to me… he was a real piece of s**t in the way he had arrogance to say that… I’m like ‘you need to stand down son.’”

Manson, real name Brian Warner, also revealed that he received all proceeds from the shirts after Bieber’s team admitted they had done wrong.