27-year-old Amethyst Realm shocked the nation when she appeared on ITV’s This Morning to discuss having sexual relations with ghosts.

Amethyst, a spiritual guidance counsellor from Bristol, claims to have had sexual encounters with up to 20 different ghostly lovers, who all gave her orgasms.

‘It started as an energy then became physical. There was pressure on my thighs and breath on my neck. I just always felt safe,’ she explained.

After wanting to take things further, she put on lingerie to entice the ghost into becoming more physical with her.

When asked by Holly and Phillip about how having sex with a ghost works, she said; ‘You can still feel it, it’s difficult to explain. There was a weight and a weightlessness, a physical breath, and stroking, and the energy as well.’ 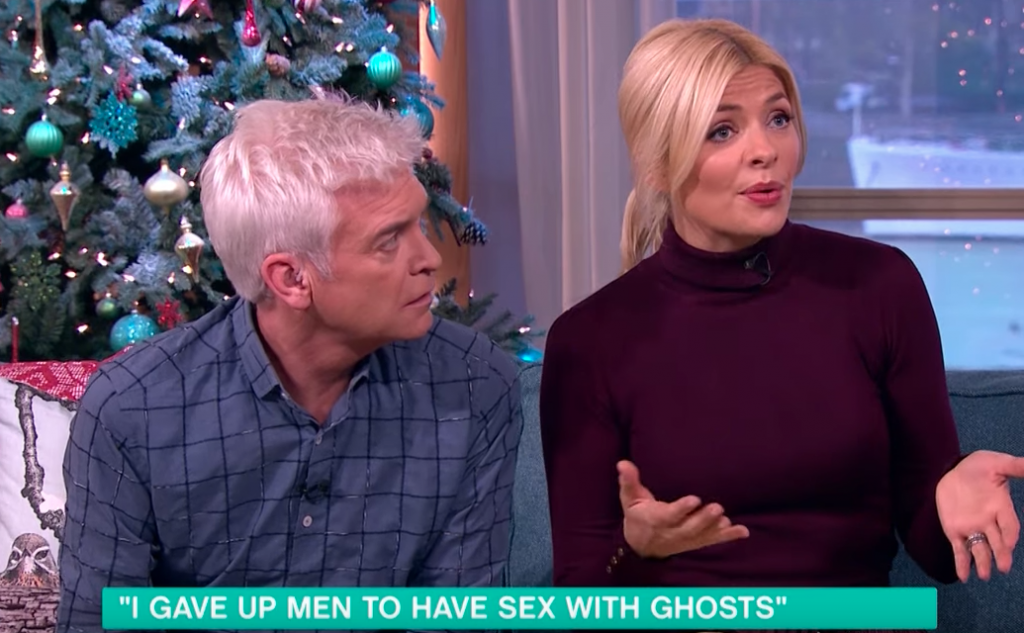 Phillip asked if it was possible for the sex to end in orgasm, to which she replied; “Yes, well for me anyway”.

Prying further, Holly and Phillip asked how she could tell her ghost lovers apart,  ‘You can always feel the difference, it’s the same with different humans, they have different energies,’ she said.

At the start of her experiences, she was happily engaged to her fiance, however, after a while, he discovered she was ‘cheating’ when the ghost apparently showed its physical form to him, something which she herself had never seen.

Since starting relations with supernatural beings, she has declared she will never go back to men and hopes to settle down the right ghost and to start a family.

You can watch the interview below;

Viewers where astonished by the story and took to Twitter to express their feelings about the segment;

Casper has gone from the friendly ghost to Casper the friend with benefits ghost. #ThisMorning https://t.co/6ZNikNfpk0

@thismorning @Schofe @hollywills #sexwithghosts. The ghost must have put the Willy’s up her. 🤣 #madasaboxoffrogs #thismorning

I gave up men to have sex with ghosts.. am I reading that right? So spirits having a better sex life then me.. @thismorning @ITV #tv #shockingstory #embarrassing #ThisMorning #sexwithghosts #lol #RT pic.twitter.com/4pdldKawiD

She actually just sat on national TV and said she has sex with ghosts and is waiting for The One, stop the World I’m getting off 😭 #ThisMorning

Think she might be on the spirits rather than them being in her. #SexWithGhosts #ThisMorning pic.twitter.com/fxrJ7aHIVc